Just as we were setting out for PlayStation Experience in December we saw the most amazing video, made by Mat Hill, called What’s a No Man’s Sky.

It blew us away that someone so talented would make a live-action fan video filled with special effects for No Man’s Sky. It’s also funny, and it feels like Mat really gets what we’re trying to do with No Man’s Sky, too, so we got in touch with him to ask him how he produced it, from the script to the special effects, and he sent us an amazing account of its making.

We thought we’d share it with you, because now we have even more respect. Over to Mat!

As a big fan of space, adventures and Debutante, the No Man’s Sky VGX trailer left a big impression on me. It was great to see an appreciation for classic sci-fi and I couldn’t wait to explore the universe Hello Games had created! In the meantime, I figured it would be cool to work with the style in a live-action piece…

After seeing the E3 trailer I began to model the ship in Blender. It was pretty difficult to get the proportions right with only a couple of screen-grabs for reference, but I guess that’s a good way to practice! To make the ship look as realistic as possible I used the sub-d surface technique. If you’re not into 3D modelling, its basically a method where the edges of the model are never perfectly sharp. It takes up waaay more polygons and time but it is the key to film realism!

Once I was happy with the model, I UV-unwrapped it into two squares. These allowed me to hand-paint the ship’s 8K textures in Photoshop. Texture painting is rather fun, and you can go really in-depth with the different kinds of dirt/scratches/decals you might find on a used space craft. Whenever I’m creating something that has painted metal, I like to have an ‘unpainted metal’ layer underneath everything. This allows me to scratch away at the paint layers with Shaddy Safadi’s awesome brushes, revealing the shiny metal underneath.

Using my diffuse colour textures, I generated specular and bump maps. These were used in conjunction with Blender’s materials to control reflections and tiny surface details respectively. I won’t go into too much detail here, but I used a pretty standard Fresnel + physically accurate glossy reflections set-up. Blender’s new(ish) rendering engine, Cycles, has a great node-based system for making custom materials, and it allows for extremely flexible colour correcting for when you can’t face going back to Photoshop. 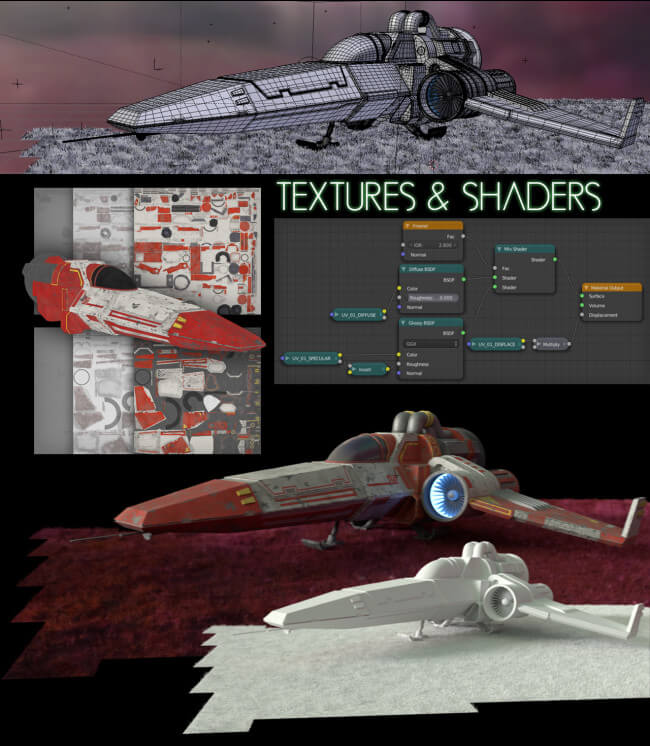 During the E3 buzz, I kept an eye on what kind of response the trailers were getting across YouTube. I found it very interesting how some aspects of the game would go unmentioned, whereas others would suddenly become the subject of huge comment threads. The disparity between what the developers anticipate and what the audience come up with seemed like an interesting theme to explore.

The writing process was fairly straightforward; I came up with a list of jokes that I hoped would appeal to fans, then picked the ones that strung together nicely in a sketch. I tried to keep it simple as I still didn’t know much about the game.

I did know early on that I would need a pretty convincing space suit… To avoid spending lots I made the suit out of two painter’s overalls, some cardboard, various bits of polymer packaging, spray paint and a pair of ’80s ski gloves. It took about a day to put together and used up a lot of masking tape! I was sceptical that it would look good enough at first, but once the neck ring was in place things started to fit together. It was fun choosing parts to add, and I enjoyed wearing it around the house for a bit.

We actually had to film this video twice, as the first shoot was ruined by high winds and broken XLR cables… Luckily, I’m no stranger to re-shoots, and my lovely crew were just excited to see how I could use the ‘practice’ to refine the video further. It was pretty tricky to arrange the second shoot, but three weeks before the planned release date I managed to cobble together a dream team!

This was my first time directing professional actors but I had worked with both Conner and Parys before, so I knew I could trust them to do a great job. Thanks to them, Adrian‘s experienced boom-pole operation, and Luka‘s super efficient production assistance, the shoot ran smoothly and took less than three hours! We even had direct sunlight for one of them!

I cut the film together the next day, then set-up each shot in After Effects. Over the next two weeks I systematically cut out the actors (every… single… frame) and changed the background colours to something a bit more alien. I had done some colour tests beforehand, as well as creating the HUD in Illustrator CC. I made the moons, plants, pollen and dinosaur foot using Blender’s various sculpting/modelling/simulation tools. The sweet rocks were created in ZBrush by the extremely artistic Annie Rowland in her weekend off! 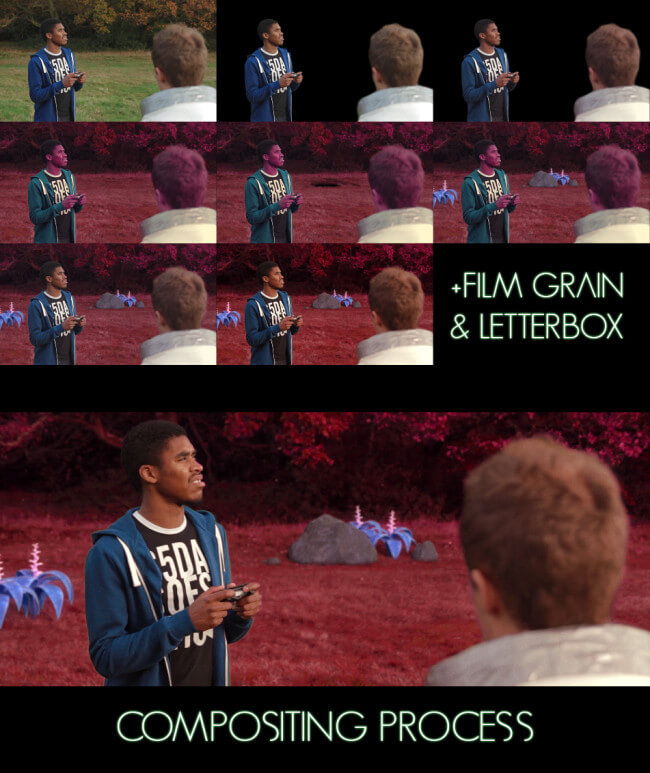 Whilst this was going on, Luka set to work on the sound design. He started by cleaning up the dialogue to remove wind and traffic noises, then he created an ambient soundscape to set the film in an alien forest. He also created all the foley and sound effects from scratch! You don’t wanna know how he made the dinosaur roar…

Towards the end of post-production, I found myself humming the Jurassic Park theme over the ending. After a whirlwind experiment with 65daysofstatic-style instruments, I recorded a rough little cover of the melody line. Its cool how many people enjoyed such a last minute addition.

It was a pretty crazy couple of weeks, but everything I wanted to try got done. It was also really nice to involve Luka and Annie in the post-production, as I now get to enjoy their contributions whilst hating mine :D. If you’re still here, I’d like to thank everyone involved in creating this video, along with all the wonderful people who have shown such enthusiasm for it! The feedback has been incredible and hopefully the people at Hello Games/65 feel just a little bit more appreciated for their work.

Seeya in the Universe!

Thanks so much, Mat!

(By the way, if you found this interesting, you might also want to take a look at how another cool fan project was made, Jared Bennett’s kitbashed model of the No Man’s Sky trailer’s fighter!)