No Man’s Sky at Gamescom

The studio is working full-tilt at the moment, finalising the launch of Joe Danger for Vita (next week!) and working up to something super special for No Man’s Sky, so we hope you’ll forgive us for dragging our feet a little. But we wanted to post a piece Sean wrote for PlayStation Blog on us going to Gamescom.

I’m Sean Murray, and I work at a little indie studio in the UK, making a game called No Man’s Sky. I’m writing this on a plane back from Gamescom, where we showed some press the game behind closed doors.

We’ve only done three days where we’ve talked to press about the game so far (two at E3 and one at the VGX show last year), but for an indie game we’ve had lots of interest and excitement. Something I’m still struggling to get my head around. So much so that I didn’t actually want to go to Gamescom! We’ve never actually shown any European press the game though, and we felt bad about that.

Sony provided a room and I gave 100 members of the press a demo of the game for an hour, together with a really rambling presentation… where I apparently never looked up at the crowd once 🙁

I can’t really remember what I said, but I guess I wanted to share some stories from development, and I thought maybe you’d find them interesting too.

We tell people No Man’s Sky is a science-fiction game, set in an infinite procedural universe. When I read sci-fi growing up, though, the thing I always wanted to experience was the feeling of touching down on a planet that no one had ever been to. To walk over the crest of an alien landscape and not know what I might find.

My favourite moment so far from making No Man’s Sky happened a few months back. David was adding four-legged creatures to the game (he insists on calling them ungulates), Hazel was adding a weather system, and Ryan was adding collision to all the trees (which is really hard when you have a whole forest full of them). I hadn’t seen any of this, and I was flying around the universe, trying to take some screenshots.

I neared the surface of a planet and suddenly it started to rain. As I was touching down I scared some deer who broke through the woods, dodging in and out of trees. Now this was jaw-dropping to me, because I’ve never seen any of these systems before, but also it felt like this was a real place I’d discovered. No one had been there before, and I didn’t know whether to shout excitedly, or just keep it to myself. 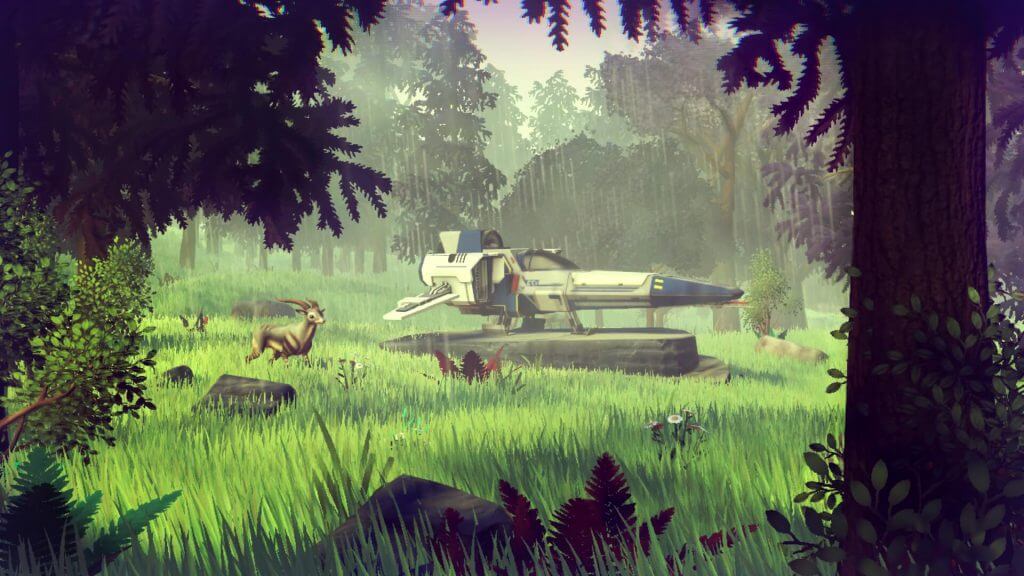 In a nutshell, moments like that are No Man’s Sky for me. Sure, there is trading, combat, weapons, ships and a core game, but really for me the quiet moments of discovery are what it’s all about.

The cool thing is that every planet has a single number, a random seed, that defines everything about that planet. A single random seed generates every blade of grass, tree, flower, creature. So as the developer I can note down the planet seed, and then just go back there any time I want. We demoed this at Gamescom, just jumping round the universe to different planets. There are no load times, because nothing needs to load, as the planets are entirely computer-generated.

Being a coder, I really enjoy the tech side of things, but that’s not what’s important. What’s important is how interesting, varied and exciting we can make this universe of ours. That’s what developing No Man’s Sky really is. It’s about filling the universe.

The procedural technology does lots of that for us, but we have to provide it with the sparks, like the patterns of spaceship design that we think look great, and different types of creature and the way they vary. We have to build the systems, the rules. We’ve shown so far creatures that you’ll be familiar with, but we’re thinking now about creatures that look far more alien, and they’re slowly changing the way even we’re perceiving the universe. It’s getting weirder, maybe not so friendly, and surprising us at every turn.

It’s been a joy to see the game boot every day as No Man’s Sky becomes richer and more varied and we see more surprising things, but it’s also sort of frustrating, because it’s so hard to share our excitement at what we’ve been creating. It has never felt right to just go off and show off lots of a game that’s about discovery. It’s like that should be up to you when you finally get to play. I can’t wait for that, and it just makes me want to finish the game as soon as we can.

And my plane has just landed! Thanks again for everything, and we’ll talk again soon.