Since E3 last year, we’ve been a little quiet on showing No Man’s Sky. There’s a good reason for that – behind the scenes the team has been very hard at work at making the game as good as it can be as we come towards the end of development. Needless to say there’s been a lot of late nights at the Hello Games office!

Though June is not too far away, we felt it was super important to show everyone a little more on what’s to come before release.

Media from across Europe and North America were recently given the biggest look of the game to date, taking them through a whole solar system’s worth of planets crammed full of exciting discoveries – some familiar, some less so – that explores what it’ll be like to play from day one.

We won’t spoil the surprises in store here, so we recommend you visit your favourite website or blog to hear more 🙂

As well as announcing a release date – June 21 in North America, June 22nd in the Europe, and June 24th in the UK – we’ve also been thinking of cool ways fans can get their hands on the game.

Ever since we announced No Man’s Sky, we’ve been eager to hear what everyone would like to see from the game, and there’s been many, many requests on the various ways you want to play and purchase.

From today, PS4 owners can pre-order No Man’s Sky both digitally through PSN and at retail as part of a standard edition and a bumper Limited Edition, which comes with all kinds of neat extras – such as a Dynamic Theme, a gorgeous art book with concepts from the game, and a comic co-created by Dave Gibbons, James Swallow and Angus McKie. 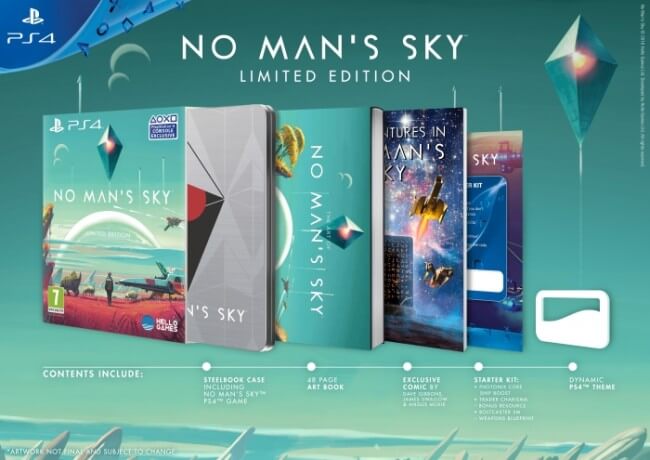 As well as pre-purchase pages on Steam, GOG.com and Humble stores, we wanted to do something special for PC fans too.

We’ve been working closely with our friends at iam8bit to create the very first official merchandise for the game, from cool prints to T-shirts and a neat Atlas pin, and a PC-only Explorer’s Pack, with a hand-painted, cast metal ship replica, some exclusive goodies and a digital copy of the game on Steam or GOG. We hope you’re just as excited as we are to get one of these!

June is just over the horizon, and we’ve got some work to go before the game is ready. We’ll be a little quiet again until then (but not completely silent – there’s still some more to showcase soon!) as we get closer to release.

As always, you can check out what the team is up to on Twitter and Facebook, as well as this here blog. Thanks as always for your support – we couldn’t have made it this far without you, and we can’t wait for everyone to be let loose on the game!