A month of IGN First

So we’ve come to the end of IGN’s month of things about No Man’s Sky! We’ve been really proud of what we’ve been able to share, and hope you’ve enjoyed it all. We’ve closed it today with Sean answering some IGN community members’ questions, including the big one … which we’re super sorry that we can’t give a positive answer to. As Sean says:

What really matters though, the big thing for us, is that date when you actually get to play the game yourself. I know you aren’t alone in wanting that to arrive as quickly as possible. If people could see how hard this team is working, how intently, passionately and crazily… man if people could see that, I’m pretty sure they’d tell us to ease off, to take a break. The reality is we wouldn’t ease off though, because nobody wants to get No Man’s Sky out there in the world more than we do.

We wanted to share some of our other highlights from IGN’s features too. Like seeing our friend Joe from 65daysofstatic talking about how they’re not cool, with a mug of tea in one hand and a box of Yorkshire Tea in the background <3 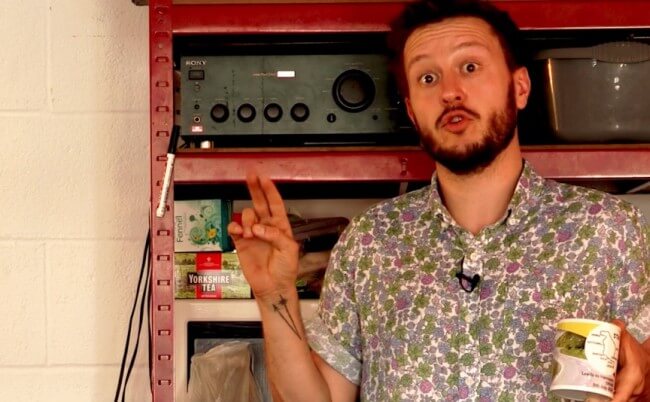 There’s also a video about the sci-fi inspirations behind the game, and there’s our sound designer Paul Weir talking about how he records hand driers in public toilets.

We really liked this piece about the background of the game, and where the studio came from:

Hearing Murray talk about this period, you can detect a sense of restlessness in his voice and body language. He should’ve been happy with the success of Joe Danger – it allowed Hello Games to grow the team up to 10 people, move into a slightly bigger office, buy new equipment, yet it had also made things a bit dull. Murray, and his fellow co-founders, suddenly became employers. Hello Games was in danger of becoming too serious and respectable.

There’s this video about the procedural engine that runs the game, too. And, of course, we kicked it all off with the first glimpse of flowing gameplay, which people really seemed to enjoy. Thanks so much, and thanks so much to IGN and all their support. We’ll forgive you for landing your ship on that building 🙂