We’re incredibly lucky to have some amazingly talented people who have been inspired by No Man’s Sky to make things based on the game. There’s a model ship, and a CG-filled video, and maybe people are quietly making more right now…

But the latest is Jonathan Taylor, who built a radio-controlled plane based on a No Man’s Sky ship. It’s actually only on-screen for a moment, part of our first trailer, but Jonathan made it fly, and we had to ask him how he did it.

First, though, here’s the plane in motion:

And here’s Jonathan, who’ll take you through the steps that led to its creation. It’s just fantastic.

I gained an obsession watching the No Man’s Sky trailers and news updates, and during one of the trailers this scene flashes up for less than a second. 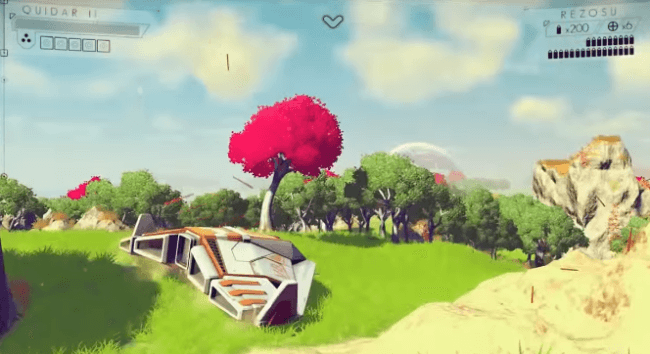 I wanted to make a flying radio-controlled ship from the game, but the others don’t have a wing area as large as this one, which made it a good choice to try to create as a radio-controlled plane.

I searched for any clips of the ship I could screencap, so I could get an idea of its proportions. I had to learn to use 3D modelling software, but only needed the basics, and eventually I came up with this. 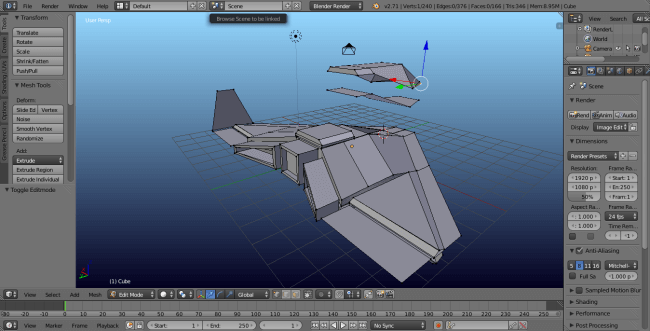 There are a few major design differences. My only goal was to be able to take a photo of it in the sky and for it to look real, because I’m a big fan of practical effects.

I’ve built very few models from scratch before, so I had to do a lot of research on models of this particular shape. It’s called a flying wing design. I’m guessing the person who originally designed it had some knowledge of their dynamics as it already has vertical stabilisers on the wing tips. These help it track in a straight line.

One of the design differences is that the middle booster is further forward than the rest, because on my test version (which flew beautifully but HATES wind!) the motor was mounted on the rear. In the final version I had to mount it on the front of the ship, because flying wings need to be nose-heavy to fly, and the weight of the glue and details already weigh the back down significantly.

I also had to have control surfaces, so I replaced the outer boosters with flaps which control the roll and pitch. 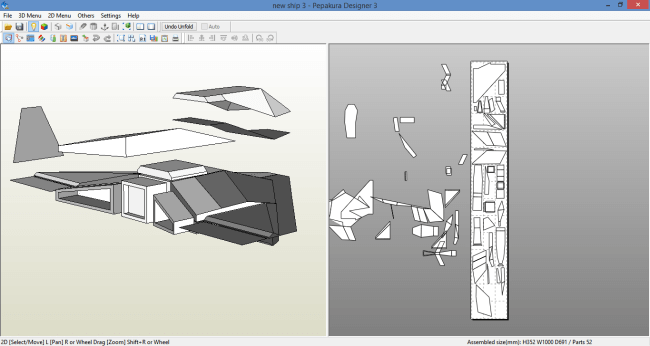 After I was satisfied with the 3D model, I exploded it into ‘blocks’. This makes construction easier by breaking the ship down into smaller sections. The program I used was Pepakura Designer, which is popular with cosplayers for breaking down 3D models of armour and such.

You can separate and break down sections into paper templates to be printed off, cut out and traced on to a suitable material. I used depron foam, which is popular with RC plane builders for its high strength to weight ratio. 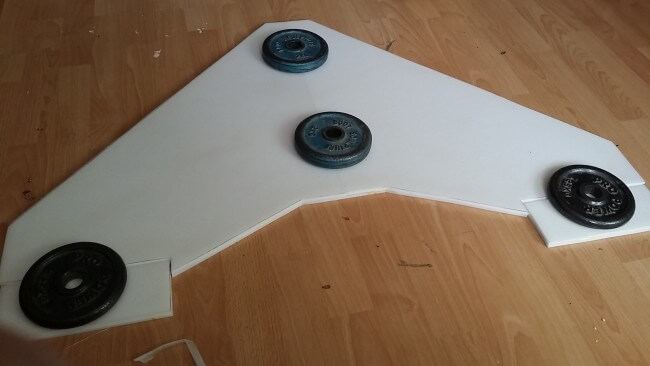 Here the main body and the flaps are being glued down. The plane was built around this. I test-fitted parts and used weights to hold them down as they dried. Planning ahead, I made cavities for the wires to travel through. 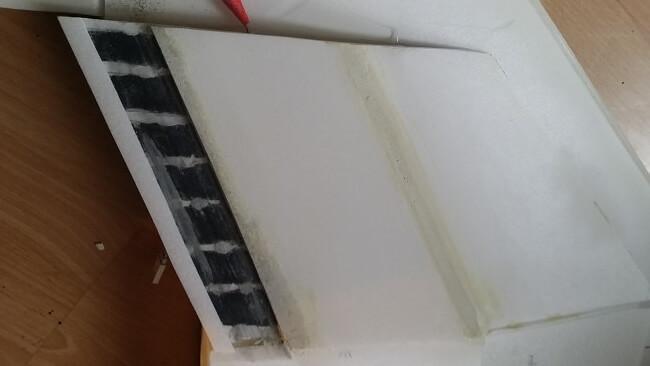 I tried to use spray paint as a mask to avoid the glue yellowing the foam, but it ended up eating away the foam. Scrapped and built again! 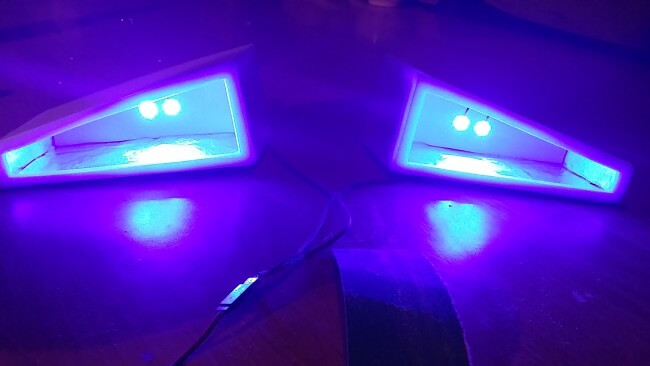 I lined the boosters with tin foil, so the light can be seen from most angles. 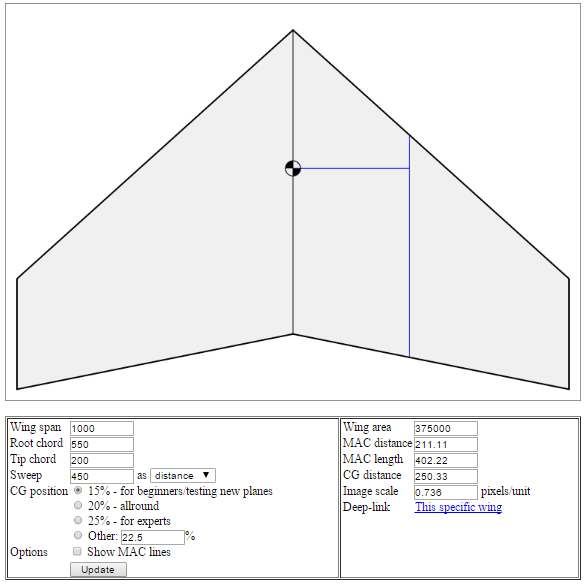 The final and most important step is balancing the centre of gravity. All planes have one, and on flying wings it’s incredibly sensitive. It determines where the battery sits in the plane, because the battery is the heaviest part. I used a popular modellers’ tool at http://fwcg.3dzone.dk/. 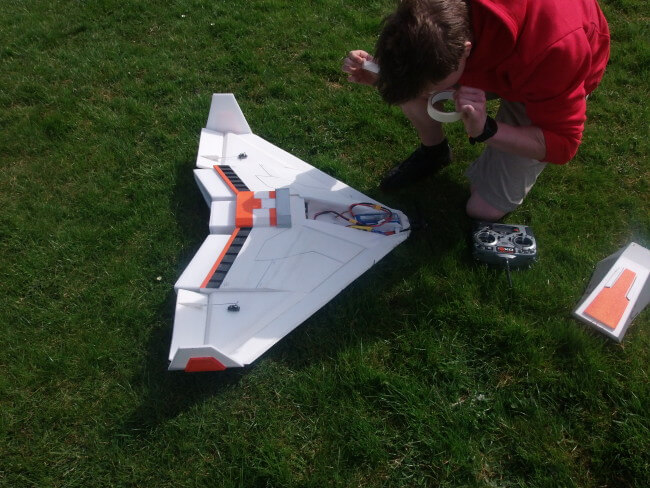 I always carry tape to the field, and used it this time to strap the wires down so they don’t flail about inside the ship.

The worst part about test flying a new plane is launching. Revving it up draws everyone’s attention at the field from quite a distance. On its very first launch, the boosters complicated the centre of gravity calculation because of their shape. I ended up fighting the controls and ended up landing it hard on its side. Nothing major was broken, and the fact it got in the air was evidence enough that it could be flyable!

I repaired the minor damage, and the issue was obvious so I opted for a heavier battery to weigh the front down. When it was balanced, the plane became very lofty, happy at slow speeds, and very forgiving, almost like a beginner plane. It climbs steeply and is very gentle to steer. I’ve never flown a plane so low and confidently!

In the end I decided to keep the dents and grass marks, because the ships show weathering in the game, and it makes it truly my own. I wouldn’t change a thing! My main hobby is turning coffee into planes. I’m fascinated by things that can fly, and I like to take concepts and make them real.

Thanks so much, Jonathan!

So, for the record, Aaron, who designed this ship for the game, didn’t look too deeply into flight dynamics to put it together. His philosophy is definitely of the “if it looks like it’ll fly, then it’ll definitely fly” category. So to see it actually working in real life is one hell of a buzz, and at a guess, it probably means Aaron is a natural aeronautical engineer.