Last week Jared Bennett tweeted us the best picture, a photo of a 1/32 scale model he’d built of a ship from No Man’s Sky. Look at it! It lights up! 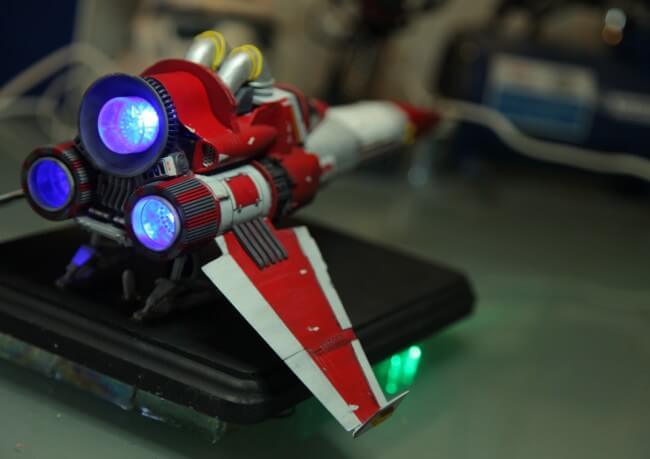 We love it, and we really wanted to know how he made it. So we asked him, and he wrote us the following, with gif diagrams. (And now we feel a bit guilty he had so little hard info to work with…)

I have been building models and dioramas for a little over 10 years. I was toying around with the idea that I wanted to scratch-build/kitbash a model, but I could never figure out what to make. When I first saw one of the ship’s from No Man’s Sky I knew it would be a challenge, but it inspired me to go for it.

When I first started making this model, I had about only two pictures to work with, along with screenshots I took from the E3 press conference. Like many of you, I initially freaked out over how cool this game looked. This project started off with a base model, which has almost the same shape as the Battlestar Galactica’s Colonial Viper. Since I’m not a fan of the show, I had no problem using it for parts.

The wings were taken from a F-18 jet, and I added strips of cut styrene. This model is mostly kitbashed, meaning I used a lot of parts from other models, but some were made from scratch. Trying to discern all the details from simple screenshots was pretty difficult. At the time, there weren’t any quality pictures of the rear of the ship’s engines, so I had to kind of make it up as I went along. I created the ‘main’ center engine from the strut tower of a Saturn V rocket and the cap to a water bottle.

The hardest part of this model was the top. I kitbashed and scratch-built it about four or five times to get it just right. I ended up using clay for (what I think are) the silver exhaust ports on top and wrapped them in styrene. I applied Legos underneath them, as well.

The engine rings…the two dreaded engine rings! It took a lot of trial and error to figure out how to make them. Luckily, I eventually happened to find two plastic rings that could work; my company was rebuilding my office, and a pair of rings that held a bunch of wires together were getting thrown out. So I cut them in half and Dremeled them to size. They ended up working perfectly.

It took me about two months to figure out the top and the nose cone. The paint job was really satisfying to see come together.

The art design on these ships is amazing. Hello Games has really successfully branded their own style of ships. Everything else on this ship was found just walking around stores or listening to Adam Savage talk about what he used while he was working for ILM. It was a lot of fun to figure out what would work where. That’s what making models is all about: it helps you imagine that you can make anything with anything. There are no limits to what you can make or find and build with the seemingly most random materials.

I like to think that is what No Man’s Sky is about. This game’s universe similarly has no limits, and as a huge fan of science fiction, that’s what makes me really excited to play.”

Thank you so much, Jared. This ship is completely amazing. You should totally follow Jared on Twitter, where he’s posted loads of great pictures of his Star Wars models, too.